The 16 shift registers inside the Dot Matrix Display each have five pins (and a GND and Vcc line) to control them: clock (SRCLK), serial data (SER), latch (SCLK), output enable (OE) and reset (SRCLR). 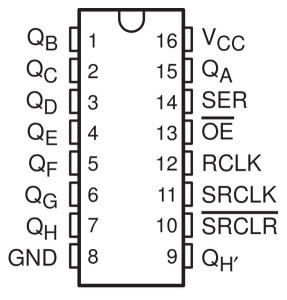 The QH is the overflow output pin of the serial input data and is connected to the following shift register. By connecting the QH of each shift register to the next one, data can simply be clocked through. All input pins of the first shift register are mapped out on the Dot Matrix Display except the reset line (which is just pulled high). The clock pins, the latch pins and the output enable pins are connected with the same ones of all other shift registers so they work synchronously.

If input A is high and input B is low, then the second row is selected which means that only the second output line is high and the others are low etc.

For full implementation of shift registers and the multiplexing chip, go to SpiData Array.