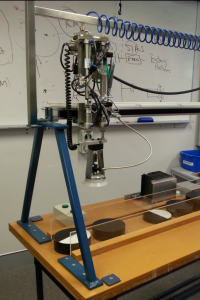 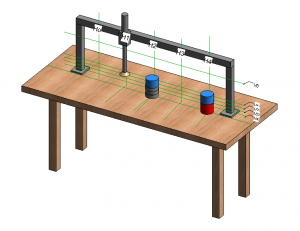 This time my team were tasked with programming a Siemens S7-300 series PLC in ladder logic (only) to solve a ‘puzzle’ from an unknown arrangement and starting position. This ‘puzzle’ was to find and sort two stacks of discs according to the height of each disc in to their prescribed positions. A number of dormant, start-up, recover and e-stop sequences were also prescribed. 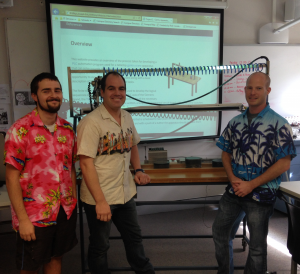 The most interesting part of this project was only being able to view the gantry apparatus for a short period of time at the very start and not being able to test an code on the apparatus itself until project delivery.

For this project, I took charge of the overall architecture, debugging and fixing/rewriting of sub-functions where required.

The chosen approach was a Hierarchical State Machine (HSM) design which allowed each group member to work independently on remaining functions to be implemented which was a big advantage over other groups’ approaches.

How did it go? Great Success! Credit to my group partners Anthony Moody (left) and Eric Joseph Roy (middle).

There is also a fairly detailed Gantry Project Sub-Site is you would like further details or to check out any of the finer details.