The project decided upon is a Coffee Machine. Coffee Machines are a very widely know device that dispenses various types of hot beverages at the push of a button. Caffeine based beverages have been around since early eleventh century were Arabians were known to start mixing coffee beans into drinks. It wasn’t until 1818 when Mr Laurens of Paris, France designed a metal percolator that the idea of the automated coffee machine became a potential. By 1833 Dr Ernest Illy invented the first automatic espresso machine which eventually led to the vending machine styled coffee machines known today.

Project 4 requires the use of both SCL and GRAPH programming languages to construct a user friendly application that can display the power and usability of both these languages. This project must me designed in such away to help students being introduced to SCL and GRAPH for the first time and show the advantages and disadvantages. 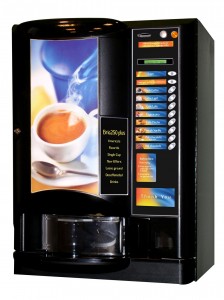